Bread pudding was most likely created due to the desire to use up stale bread that would otherwise be inedible blocks of toothsome concrete. The ingredients for bread pudding is relatively simple. You take stale bread and steep it in milk, beaten eggs, and sugar (raisins optional), and allow it to sit in a casserole dish until softened, and then bake it in the oven. What comes out is creamy and sweet and not unlike moist cake. You can use a lot of different types of bread for bread pudding, including baguettes, brioche, white, wheat, and even sourdough.

What is everyone thinking of when they think of bread pudding? Perhaps you never thought it could be anything more than just its namesake, but we’ve been experimenting with it for a while. Even though bread pudding can be both sweet and savory, today we’re examining 14 amazing and delicious bread pudding dessert ideas for your next party, or when you’re wondering what to do with all that leftover bread.

Bread pudding also freezes well in blocks and can be easily warmed up at a later date. Just bake, and then allow to cool in the fridge and cut into ziplock bag sized blocks. You’ll want to make sure when you’re preserving them in the freezer that there aren’t any air pockets, as the freeze-thaw cycle of your freezer can cause ice crystals to form and the bread pudding to dry out and have freezer burn.

Traditional bread pudding is sweet and filling, with a nostalgic feel to it that reminds us of the chilly winter months. It’s a staple during the holidays and it’s sweet scent baking in the oven brings to mind crunching snow under our feet. Of course, it doesn’t have to just be for the cold, since stale bread waits for no one (although you could freeze all your stale bread pieces until you have enough.) While the bread pudding is already amazing on its own, whipping your own cream by hand provides an extra layer of decadence.

It’s also so easy that you’ll wonder why you ever bothered with that stuff from a can. Rich, creamy, and fluffy, a dollop of homemade whipped cream atop rich bread pudding will impress your guests (and yourself.) All you need is a container of heavy whipping cream, some sugar, and either a food processor, hand mixer, electronic whisk attachment, or even just a regular old whisk (although your hands might get tired), whipping it until stiff peaks form. Put it out in a bowl and watch it disappear. 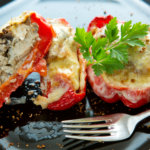 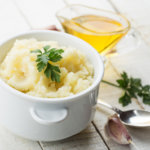 Mashed potatoes are a classic dish that most people are familiar with. They are usually served as a … END_OF_DOCUMENT_TOKEN_TO_BE_REPLACED 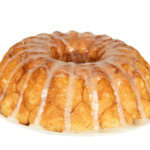 You might be forgiven for assuming that monkey bread is some sort of bread, that would no doubt be a … END_OF_DOCUMENT_TOKEN_TO_BE_REPLACED 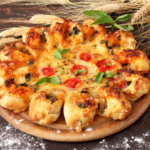 Making homemade pizza is an exciting, and delicious affair. The scent of cheese, herbs, and sauce … END_OF_DOCUMENT_TOKEN_TO_BE_REPLACED 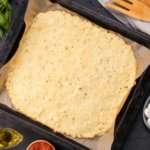 If you are following a low carb diet, chances are that you already know that cauliflower is your … END_OF_DOCUMENT_TOKEN_TO_BE_REPLACED 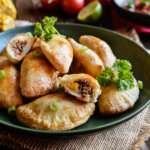 Pierogi is a central European dish enjoyed in Poland and several other countries on the continent. … END_OF_DOCUMENT_TOKEN_TO_BE_REPLACED